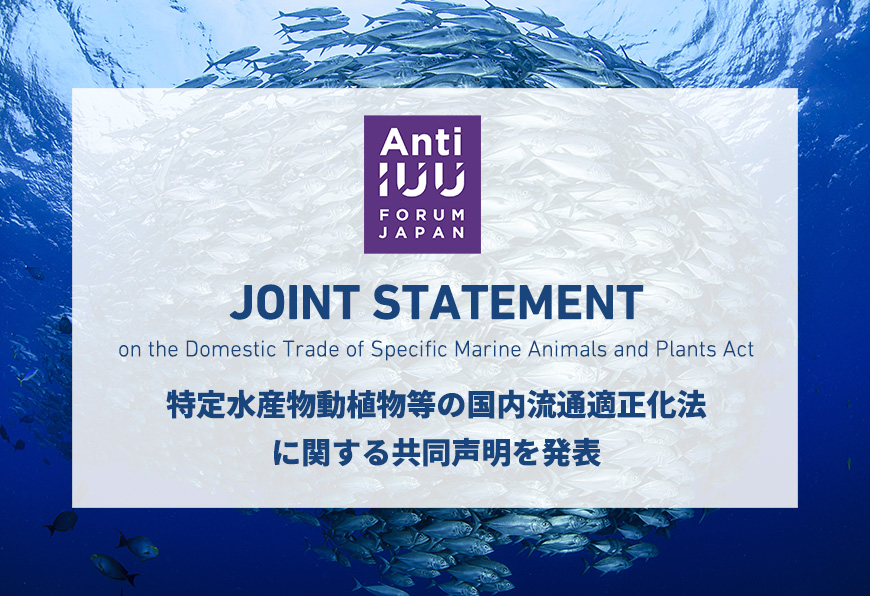 The Anti-IUU Forum Japan (consisting of WWF Japan, Seafood Legacy Co., Ltd., Sailors for the Sea Japan, The Nature Conservancy, Environmental Defense Fund, and GR Japan K.K.) has announced a joint statement concerning the “Domestic Trade of Specific Marine Animals and Plants Act” that was passed and enacted in the plenary session of the House of Councilors on December 4th. This legislation aims at deterring IUU (Illegal, Unreported and Unregulated) fishing.

These activities, conducted against national and international laws and regulations, have been a serious threat to the sustainable use of fishery resources and the conservation of marine ecosystems, and therefore need to be eliminated through international campaigns. Up to 30% of the seafood imported to Japan is likely sourced from IUU fisheries, and there have been various issues relevant to IUU fishing around the Japanese waters as well, including squid fleets from nearby countries committing illegal operations in the Sea of Japan.

Amid such situations, the Anti-IUU Forum Japan highly recognizes and welcomes the enactment of this particular legislation. This is a very favorable action, enabling Japan to fulfill its responsibility as one of the major seafood consuming countries in the world. Moreover, the enforcement of this law will lead to eliminating unfair competition, enabling fishery operators in Japan complying with existing rules and regulations to secure appropriate levels of income they are supposed to earn.

In this joint statement, we have proposed the following three key actions to be implemented within the next two years, by the time this new law takes effect.
· Selecting species to be covered based on fair and clear criteria
· Reducing the workload of operators and enhancing traceability through electronification
· Pushing international collaboration forward

The following are the comments on the joint statement from members of the Anti-IUU Forum Japan:

Wakao Hanaoka(CEO, Seafood Legacy Co., Ltd.)
The new framework will eliminate IUU fishing risks from Japanese seafood markets and allow operators doing the right things to be justly recognized. Together with strengthened seafood resource management starting this month under the revised Fisheries Act, it is a fundamental basis to transform fisheries industries into growing industries. I greatly appreciate and welcome how Japan, leveraging its buying power as a globally leading seafood market state, is making a large step to revitalize domestic fisheries industries and solve global issues. I am hoping that the three key actions toward the implementation of the new law, proposed in the joint statement, is going to show great progress from here.

Yukihiro Misawa(Seafood Market Manager, WWF Japan)
As a member of the committee on catch documentation schemes called by the Fisheries Agency of Japan, I participated in many discussions on the establishment of a new scheme over the past ten months. I would like to welcome the enactment of this new law to regulate international and domestic trade of seafood sourced by IUU fishing. Japan has great roles and responsibilities to end IUU fishing globally and pass on bountiful oceans for future generations. I would like to continue my support in the development of schemes in which Japan can ensure the elimination of IUU fishing from the production, importation, exportation and distribution of seafood, while collaborating with other countries.

Minako Iue(President, Sailors for the Sea Japan)
This legislation could be described as an anti-IUU fisheries law for Japan, the largest seafood consuming country after the EU and the US. We are extremely pleased and would like to welcome its enactment. The EU and the US, which are taking the lead in anti-IUU fishing frameworks, have high expectations for this new legislation. Global collaboration in developing the details of Japan’s framework prior to law implementation is being anticipated. Leading up to bill passage, Sailors for the Sea Japan has supported members of the Cabinet Regulatory Reform Promotion Council and the Anti-IUU Forum Japan by providing insight. We would like to continue our support to contribute to awareness raising among various stakeholders—from fishermen to consumers—to enable fisheries industries to become growing industries and to realize sustainable seafood consumption.

Marta Marrero Martin(Ocean Governance Director, The Nature Conservancy)
As a member of the IUU Forum as well as the EU IUU Coalition of NGOs in Europe, we celebrate this milestone. Japan is one of the 3 major seafood consuming countries in the world and this new Bill is sending a clear and strong message to illegal operators. This new legislation is starting to align Japan with the existing rules in the EU and the US (the other two major consuming nations of seafood). When this bill is fully developed and implemented illegal operators will have it very difficult to find an entry point for their illegal products.

The joint statement can be downloaded below.
Joint Statement on the Domestic Trade of Specific Marine Animals and Plants Act(435kb pdf)
NEWS 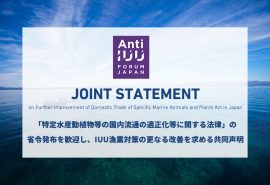 24. May 2022 ｜Press release
Joint Statement on Further Improvement of Domestic Trade of Specific Marine Animals and Plants Act in Japan 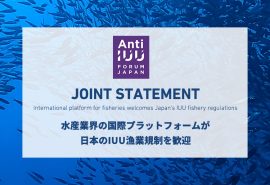 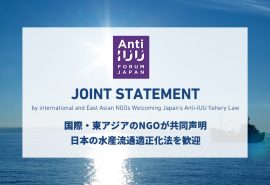